Two New Recordings For ITUNES.. or for those who want to hold it in their hands.. a FIVE-SONG EP with THREE bonus tracks!

Hello and thanks for dropping by the website! I have two new recordings available on iTunes as of August 14th, 2015 - in addition to the digital single you can get both songs along with three bonus tracks if you buy the EP right here. Click Here to Buy

A special twenty-year anniversary cd featuring the songs from Bill's 1994 Set to Pop album featuring re-makes, out-takes, demos and live versions of the same set of songs. It's new and it's old. Looking back and looking ahead. Hitting the RESET button. Click here to purchase!

Reset2014: Bill Lloyd Revisits Landmark 1994 Album Set to Pop and Comes Up with a Revelatory Reinvention

A Review by Alan Haber

Released in 1994 on East Side Digital, Set to Pop was an important record for Bill Lloyd. He had been successful in a partnership

with Radney Foster as Foster and Lloyd, a duo that registered a considerable impact at country radio and a more-than-palpable fan base. Followed by a re-release on CD in 1990 of his 1986 solo debut, Feeling the Elephant, Lloyd set to work on a followup, a career-making album that showed what he could do on the pop side of things. He set about writing for himself, “without thinking about crafting songs for a radio format.” The canvas was blank, so with nothing to lose and everything to gain (and a Ray Davies cover in his pocket), he pulled out his musical paint set and got to creating a scene.

That scene, an hour-long aggregation of songs separated by clever bits of whimsy and swimming in an ocean of talent and confidence, manifested itself as Set to Pop. Many classic albums followed–albums that saw Lloyd work his magic that was continually informed by mounting experience and travels along many musical routes. His 2012 release, Boy King of Tokyo, found him multitasking, playing every instrument not nailed down, including the drums. That album featured one of Lloyd’s best and catchiest songs, the relatable-to-all-music-geeks pop confection, “The Best Record Ever Made.” 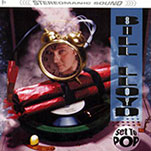 On the list of Best Records Ever Made, Set to Pop must sit comfortably alongside similarly great waxings drawn from the catalogs of other great artists. Lloyd must know how important a record he made 20 long years ago is, because he’s taken a fresh look at it, reconfigured and reshaped it into an album he has correctly titled Reset2014. And he must be serious, because he’s mixed it in Stereo-Panic Sound.

Record geeks-as-collectors are more than familiar with the concept of the alternate album–the re-christening of an original, full-length work with new and refurbished parts put in the game so the original parts can sit on the sidelines and take a well-deserved rest. Twenty years is a long time, as just about any person of a certain age will tell you. It’s generally a good regrouping point from which you can gaze back through the hazy shade of a lost winter’s dream, see what worked, why it worked, and whether it still works. The fact is, the original Set to Pop still works fine and dandy, but this new look at the Emperor’s Old Clothes is a good way to gain some perspective, and this new renaissance works like a charm, breathing clear life into an old flame. It’s like a new coat of Turtle Wax after it’s baked an hour or two in the hot sun, all shiny and bright.